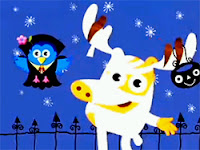 ﻿It all began three years ago, around this time of year.  The Boy and I were home watching cartoons, when these little guys - Moose A. Moose and Zee - came on singing, "I don't like candy corn."

﻿AND THE BOY FREAKED OUT!  I mean crying, running to his room, screaming NO NO NO - freaking out.

The Boy used to LOVE them!  Especially Zee.  Before the diagnosis, I used to think The Boy was flapping because he was imitating Zee.  (I know, I was completely clueless.)

And while candy corn is my least favorite candy in the whole wide world, I kind of like Moose A. Moose and Zee.  Not only are they totally adorable.  But I'll admit, their lyrics are catchy.

We haven't watching Noggin since.  If it's on at a friends house, we either have to leave or they need to change the channel.  I mean, I really don't get it; he loves everything else on the channel: Dora, Diego, The Wonder Pets, Backyardigans...but once he sees that yellow moose - it's over.
﻿﻿﻿﻿
(Staying at the Nickelodeon Hotel back in June was quite interesting.  On the 2nd day, Moose A Moose and Zee were playing on the lobby televisions and we had to run out.  For the remainder of the week, when walking through the lobby, me or The Husband had to walk up ahead - to make sure the coast was clear.)

﻿
﻿As another Halloween approaches, I'd like to sing this song with him.  I'd like to be able for The Boy not to live in fear of this moose and his side kick.

Are your kids afraid of something that makes no sense to you?   How do you help them get over their fear?
Labels: Fear, Halloween, norrin, random thoughts, WTF