When it comes to Halloween, I'm probably the least fun person in the world.  I don't care for dressing up or watching scary movies.  Sleepy Hollow is about as scary as I'll get and I really only watch that because my Johnny (swoon) is in it.  Come to think of it, the only other scary movie I'm up for watching is Nightmare on Elm Street - also featuring Johnny.  I'm beginning to see a pattern here... 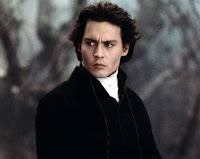 So the point is - I am not one of those people who enjoys being scared poopless.  No I don't want to watch The Shining or Paranormal Activities or a Friday the 13th movie.  No I don't want to go into the haunted house at the amusement park. I am not that kind of gal.  I scare too easily - my imagination goes into overdrive.  The few times I've been forced to watch scary movies, they've kept me up all night (with all the lights on), for many nights following.  NOT FUN!  I dare not mention any of them, I'd like to get some sleep tonight.
Fear of things that go bump in the night, often begins at childhood.  Growing up, the thing that scared me the most was El Cuco.  For those unfamiliar with El Cuco, it is the Latino equivalent to the Boogey Man.


I don't even know what El Cuco look likes.  But I imagined him as a crazy looking monster of a man, with rotting teeth, blood red eyes and filthy claw like hands.  El Cuco lurked in the dark, doing horrible things to children who disobeyed their elders.

El Cuco was always going to get me.  It was my father who put this fear of El Cuco in my young mind. He would quickly flicker the lights on and off a few times, "El Cuco's going to get you!" he'd yell.  And I'd scream, begging forgiveness and promising to behave.


I remember some nights falling asleep with my hand wrapped tightly around my bed rails, just in case El Cuco had plans of snatching me in my sleep.  Which in retrospect seems stupid because (a) if El Cuco really wanted me he would have cut off my hand and (b) El Cuco is not even real so why I am even analyzing this...

What was your  childhood fear?

Post inspired by Mama Kat "Something that scared the Hell out of you when you were a child. (inspired by Mama Sick)"
Labels: Halloween, Johnny Depp, Lisa, Mama Kat, pop culture, random thoughts, Sometimes you gotta laugh, writing/blog prompts