The Boy has words. Lots of words. I love hearing him speak because there was a time when he had no language. And we wondered if the words would ever come.

However, much of his language is scripted or echolalic. Which basically means he repeats stuff. A lot. And I don't mind it so much because often he scripts appropriately. And he uses scripted language that he's memorized from books or TV because he doesn't have the ability to express his own spontaneous thoughts.

For example, one day I took The Boy outside and it suddenly started to rain and he shrieked, "Oh no! The rain is going to ruin everything." And he said it with a little British accent because he's scripting from Charlie & Lola. I'm not going to lie...I think it's really freaking cute.

But sometimes his scripting is not so cute. Especially when we're out in public or when he's in school. Because he happens to prefer the lines with attitude. So it's a challenge because - yes we want language but we want nice language. 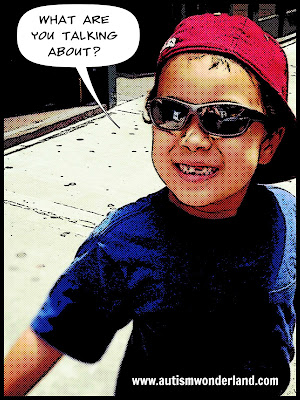 And so, this is my Top 10 List of Favorite Scripted Quotes from The Boy of 2012

What are you talking about?

Are you sure it's legal?

I'm going to touch the butt.

Do you think you have pantophobia?

Get your dopey feet out of my face.

Fish are Friends. Not Food. (The Boy eats calamari and shrimp. Best not tell him what it really is.)

Shut up. (This one drives me insane...we are really working on it.)

Don't even think about it.

And a super special thanks to Charlie Brown, The Berenstain Bears, Finding Nemo and every other character The Boy loves to script from - you've given my son the kind of language I never thought possible along with attitude and sometimes a side of silly.

Does your kid script? What are some of your favorite or not so favorite scripts?