This morning I schlepped all the way out to Brooklyn.  BROOKLYN.  Via public transportation since my driver The Husband was unavailable.

For those of you not familiar with the MTA NYC Subway - here's a visual. 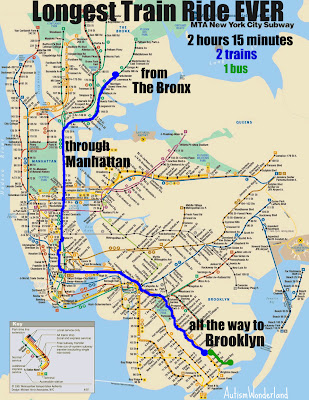 Now had I been rolling solo, I could have read a book, listened to my iPod, maybe even write.  But I was with The Boy...so you all know how that goes.  Sure I kept him entertained with my iPhone but it was a lot of "Are we there yet?"  The first 10 times are cute but by the 35th time...no, not so much. 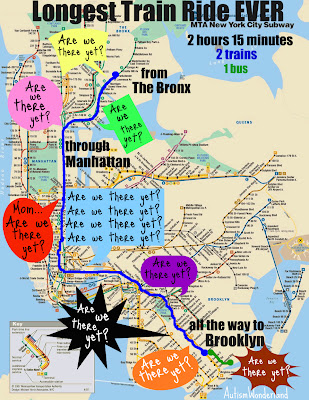 Did I mention I had to make this trip in the rain?

I don't know how to drive*.  And I have no desire to learn.  I just know it's something I wouldn't be good at.  I compare driving to playing the piano.  Anyone can learn to play the piano but only a select few can play it well.  I know I would be a bad driver.  I'm too nervous, don't do well under pressure, have difficulty concentrating and get overwhelmed sitting in the passenger seat when there's a lot of traffic.  Truth be told, I don't want to be any one's designated driver.  I want someone to drive me home.  I don't get out much, so when I do - I want to have a grand old time.

Today? I really wished I knew how to drive.

Because after I was done with our appointment, I had to get back on the bus and the train to come into work.

It was one the longest mornings of my life.  But it was worth it and I'd do it again.  (Except maybe next time, I'll plan ahead for someone to drive me.)

*I also don't know how to ride a bike or swim.  The Husband says in case there is a zombie Apocalypse - I would be totally useless.  And I agree.      ﻿
Labels: Lisa, Public Transportation, random thoughts, short n sweet, Stuff I Do for The Boy