Honor Our Leaders of Tomorrow Who Are Supporting Autism 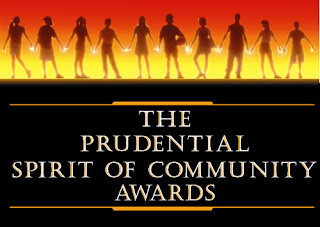 Created in 1995, The Prudential Spirit of Community Awards represents the United States’ largest youth recognition program based solely on volunteer service. Each year, the program’s judges select 102 State Honorees (two from each state and the District of Columbia) to receive $1,000, an engraved silver medallion, and an all-expense-paid trip to Washington, D.C. where the students will tour the capital’s landmarks, attend a gala awards ceremony, and visit congressional representatives on Capitol Hill.

The awards program’s State Honorees for 2012 include many remarkable students whose volunteer service was devoted to Autism. Those students include:

Rebecca Ackerman, 16, of Westborough, Mass., a junior at Westborough High School, leads a fundraising team that has generated more than $80,000 for autism research over the past six years, and works in a variety of other capacities to raise awareness of autism. “My twin brother has never spoken to me, or given me a hug,” said Rebecca. “Even when he stands right beside me, he’s in a different world. David has autism.” When she was 11, Rebecca realized that, even though one in every 110 children has this disorder, most people were not familiar with autism and not much money was being spent on research. “I was determined to change that reality,” she said.  Rebecca organized a team of friends and family members to participate in an annual fund-raising walk for Autism Speaks, a national organization, and to work on autism funding and awareness projects throughout the year. As captain of the “Doing It For Dave” team, she writes letters asking for donations, conducts bake sales and yard sales, operates lemonade stands and coordinates car washes. Rebecca, who also serves on the Boston Autism Speaks Committee, helps coordinate the organization’s annual city-wide walk, gives inspirational speeches, leads webinars and mentors new walk teams. In addition, she started a charitable organization, “Cake Cause,” that provides baked goods in exchange for donations. “I wish that my brother had his own voice,” said Rebecca. “Since he cannot talk, I will do my best to honor him using mine.”

Taytum Jones, 13, of Minot, N.D., an eighth-grader at Erik Ramstad Middle School, has been volunteering with students with disabilities since she was in third grade, both in school and beyond. After Taytum discovered that there was a special classroom for students with autism in her elementary school, “I kept thinking how cool it would be if I could go down into their room and interact with them, but I always said to myself, ‘No, I’m only in third grade!’” she said. Finally, she asked her teacher, and was given permission to miss an hour of class every other day to work in the autistic room. “I thought that was the greatest thing,” she said.  Soon Taytum was spending time with the students before and after school, and during recesses and lunch periods. She helped them with sensory activities, worked on physical coordination skills including stair-climbing and exercise ball balancing and assisted with homework. Taytum also volunteered with an organization called “Dream Catchers” that teaches children with disabilities to play baseball. She continues to work with disabled students at her middle school by playing games and assisting with learning activities. “I think I have made a great impact on children,” said Taytum, who wants to be a special education teacher when she grows up. “I can tell just by the smiles on their faces that they enjoy seeing me. Putting a smile on someone else’s face can bring me up even on the worst day.”
While in D.C., 10 of the State Honorees will be named National Honorees on May 7th. These honorees will receive additional $5,000 awards, gold medallions, crystal trophies and $5,000 grants from The Prudential Foundation for nonprofit charitable organizations of their choice. This wonderful trip is designed not only to thank the students for all their hard work, but also to recognize their efforts and encourage others to follow in their footsteps.

On Monday, May 7th  you can watch the awards ceremony where the national honorees will be chosen HERE.

For more information on the Prudential Spirit of Community Awards visit their: