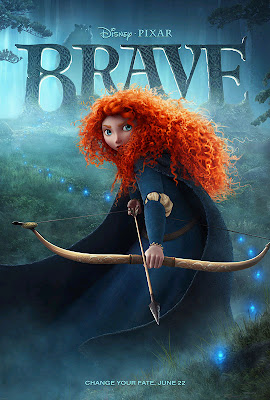 Last Thursday, I was invited to the film premier of "Brave"﻿ and I was lucky enough to be part of the first audience to see the film in 3D.

It wasn't anything like I expected - not your typical Disney "princess" movie.  I think that's what I loved most.  Merida isn't looking for a Prince - she's looking for the freedom to live her life on her own terms.  And I believe this is an extremely important message for our children.

"Brave" also focuses on the importance of familial bonds.  I don't want to give too much away about the plot but it's a touching film filled with pure Disney Pixar magic.

Would I take my six year old autistic child to see the 3D version?  Probably not.  "Brave" opens in theaters on Friday, June 22nd.  (Making it a great Stepping Up Ceremony treat). Not because I don't think he would enjoy it, but because the 3D version would be sensory overload for The Boy.

That's why I am excited that there is also a Sensory Friendly Film Screening of  "Brave" on Saturday June 30 at 10:0o am at select AMC theatres across the county.

If you've been too nervous to take your child to the movies, going to a Sensory Friendly Film Screening, is a great place to start.  And it's a great way to meet other families who "get it".

"In order to provide a more accepting and comfortable setting for this unique audience, the movie auditoriums will have their lights brought up and the sound turned down, families will be able to bring in their own gluten-free, casein-free snacks, and no previews or advertisements will be shown before the movie. Additionally, audience members are welcome to get up and dance, walk, shout or sing - in other words, AMC’s “Silence is Golden®” policy will not be enforced unless the safety of the audience is questioned."

For details & locations please click on the link below -
http://www.autism-society.org/get-involved/events/sensory-friendly-films/

Since ancient times, stories of epic battles and mystical legends have been passed through the generations across the rugged and mysterious Highlands of Scotland. From Disney and Pixar, a new tale joins the lore when the courageous (voice of Kelly Macdonald) confronts tradition and challenges destiny to change her fate.

“Brave” follows the heroic journey of , a skilled archer and headstrong daughter of King Fergus (voice of Billy Connolly) and Queen Elinor (voice of Emma Thompson). Determined to carve her own path in life, defies an age-old custom sacred to the unruly and uproarious lords of the land: massive Lord MacGuffin (voice of Kevin McKidd), surly Lord Macintosh (voice of Craig Ferguson) and cantankerous Lord Dingwall (voice of Robbie Coltrane). ’s actions inadvertently unleash chaos and fury in the kingdom, and when she turns to an eccentric Witch (voice of Julie Walters) for help, she is granted an ill-fated wish. The ensuing peril forces to harness all of her skills and resources – including her clever and mischievous triplet brothers – to undo a beastly curse before it’s too late, discovering the meaning of true bravery.

Directed by Mark Andrews and Brenda Chapman, and produced by Katherine Sarafian, “Brave” is a grand adventure full of heart, memorable characters and signature Pixar humor that audiences of all ages around the world have come to eagerly expect. The film takes aim at theaters on June 22, 2012, and will be presented in Disney Digital 3D™ in select theaters.

A grand adventure full of heart, memorable characters and signature Pixar where the headstrong (voice of Kelly Macdonald) defies an age-old custom and inadvertently unleashes chaos, forcing her to discover the meaning of true bravery before it’s too late. Opens June 22, 2012, in Disney Digital 3D™ in select theaters.


Disclaimer:  I was granted free admission to view "Brave."  Opinions are my own and have not been influenced in any way.
Labels: autism, Disney Pixar Films, Movies I Love, Sensory Friendly Films, Sensory Processing Disorder, The Bronx