Questions are Welcome, Staring is Not

With The Boy's kindergarten placement in a "typical" public school this September - I am nervous about how the other kids will treat The Boy and his classmates.


These are concerns every parent of a special needs child has.

A few weeks ago, I attended a BBQ with The Boy and The Husband.  There were "typical" kids at this BBQ, kids around The Boy's age. They were playing at the sand/water table near their parents when The Boy ran over.  Excited by the sand and water, he started hand flapping and making his bird like sounds ("EEEEEEEEEEEEEE").  The parents looked at The Boy and when I smiled at them, they smiled back and looked away.  I tried to introduce The Boy to the other kids.  I made him say hello.  They politely said hello back.  And that was it.


From time to time they stared at The Boy.  I could tell they were curious, trying to figure out his behavior in their young minds.  One boy even asked, "What's 'EEEEEEEEEE'?" And I clumsily tried to explain to this 6 year old about autism and sensory processing disorder.


But still, The Boy was ignored.  Not that it mattered to him, he didn't notice.  It mattered to me.  I can preach about autism awareness and acceptance all I want.  But when I step off my soap blogging box, it still hurts when your kid is the one that's left out and looked passed.  Because it's easier to ignore him, than to stop and ask questions to try and understand.  And how much can I really expect from 6 year olds?


The Boy is at the age where autism is becoming more and more obvious.  It's not like when he was 2 or 3 or even 4 when it was easily disguised.  He's 5 1/2 and he's different and there's no calling it anything else.  He is my son and he goes where we go.  We shouldn't have to hide him from society, because his behaviors make others uncomfortable. 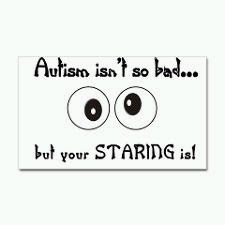 And then, just this past weekend we were in Best Buy.  And The Boy was being The Boy.  This woman smiled at us and said, "He's just beautiful."  And I thanked her.  Then she asked, "What school does he go to?"

I was taken aback by her question.  It seemed intrusive. But I told her the school and explained that it was a special school because he has autism.  It turns out the woman - Regina - was a speech pathologist.  We talked for a few minutes - about schools, related services. Regina wasn't being intrusive, she was being respectful, she was treating us with dignity and delicacy.  I'm sure she realized The Boy was on the Spectrum, but she didn't say anything until I did.  Asking what school The Boy went to was a safe, unassuming question.  (I've had people stop me in the street and say "Does he talk?" - which is sort of rude.)
I want people to come up and ask questions; I welcome them. But to stare and look away ashamed when I meet their eye? I don't want that.  Who would?

I love when people ask me about autism; when people ask about The Boy.  It shows me that people want to learn, understand and accept autism as a different way of being.  Different doesn't mean bad, it just means different.  And I want parents and children to get to know The Boy that I love.  That's all any parent wants: acceptance and understanding.

But you can't accept and understand autism if you don't know anything about it.
So if you're unsure on how to approach the parent of the "weird" kid. All you have to do is ask:


What school does your child go to?
That's the right question to ask and the best way to start a dialogue.
Labels: acceptance, advocacy, appreciation, aspergers, autism, autism awareness, awareness, emotions, stress of parenting