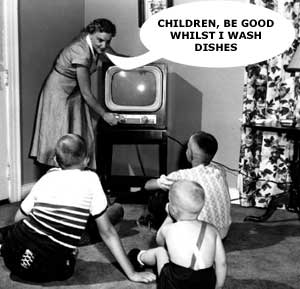 My name is Lisa and I am a Screen Time Junkie.  I  love television: documentaries, trashy reality, sitcoms, dramadies, comedies, soaps.  I watch the Home & Garden channel like nobody's business!  And I don't have a home or a garden.

And oh how I love watching movies! I could easily spend an entire day on my sofa, committing myself to movie marathons - like Star Wars or Twilight.  The Husband is a video game playing fool - we have every system: Play station, Wii, Xbox, the Kinnect.  And we are all about our computers, laptops and iPad.

So we were never those parents who said we'll never allow our child to watch TV or  set a time limit on TV.  We're bad.  Bad bad parents.

Then there are those parents who so smugly say "we don't allow our children to watch television."  But then these kids are allowed to watch dvds like Dora or the Backyardigans.  Those parents kind of make me laugh, because seriously - who the heck are you trying to kid with your holier than TV thou attitudes?  Screen time is screen time.
Anyway - we've all been there.  In those meetings answering questions about our kids.  The one I absolutely dread is: How much screen time do you allow your child?  (Screen time is essentially any time you allow your child is in front of a screen: computer, tv, iPad - even Leapster.)  And I'm always honest.  It's about 1 - 2 hours a day and on the weekends, probably more. (Way more, depending on the weekend plans and weather.)  And then I hear: you should try to limit it or manage it.
Easier said than done.
Monday to Friday - The Boy has a full schedule.  The bus picks him up at 7:19 am.  From 8:30 am to 2 pm he's in school.  He's home by 3:15, then he eats and rests for a bit.  And then from 4:30 to 7 pm, he has therapy (either SEIT or Sensory Gym).  That's a pretty long day for a 5 year old.  So if after all is said and done, he watches an hour of television - who is it going to hurt?  Because there is dinner to cook and dishes to wash.  And as much as I'd love to spend my every second working with The Boy.  I know it's not possible and I don't want it to be.  Sometimes I just want to be his mom, not a therapist in disguise.  Sometimes I need it to just keep him company, so that I can get stuff done.  Sometimes I want to sit with him and watch cartoons.
But there are teachable moments when watching TV with your child.  Ask him/her questions.  Start a conversation about what you're watching.  While watching TV, I always ask The Boy how a character is feeling or what happened?  If there's singing, I ask The Boy to sing along or dance.  The Boy almost always complies.
As for the computer and iPad - especially the iPad - they are the best things ever for The Boy.  And like TV, it's something he is willing to work for.  And he enjoys it.  He works on his hand/eye coordination while using the iPad. He engages us in conversation while using it.  He makes requests.  He makes eye contact and uses full sentences - and every word is clear enough that even a stranger could understand.
Why do we want to manage that?  We want to encourage it!
Ultimately, we give The Boy balance.  Yes, we let him watch TV and use the iPad and Leapster.  We really have no set clear cut boundaries.  (Other than making sure, anything he watches is age appropriate - obviously.)  But we read to him - every night.  And we talk and ask him questions about his day.  Sometimes he tells me.  And we sit and do puzzles and play turn taking games.  And we engage him in pretend play.  And when we play, we use scripted speech memorized from television and then we try to make it more spontaneous.
And even on those rare Saturday afternoons when I'm catching up on laundry and cleaning and cooking, when The Boy watches 3 to 4 hours of straight television.  I don't feel guilty.  Because I also know he's not sitting still the whole time completely absorbed in what he's watching.  He's running back and forth and playing with toys and reading books - often using the TV as background noise.  And because I know there are days when he doesn't watch any television at all.  And I'm reasonable enough to know that an afternoon of hardcore TV watching isn't going to be his downfall.
~~~~~~~~~~~~~~~~~~~~~~~~~~~~~~~~~~~~~~~~~~~~~~~~~~

The American Academy of Pediatrics (AAP) recommends that kids under 2 years old not watch any TV and that those older than 2 watch no more than 1 to 2 hours a day of quality programming.  For more on television and children's health, please refer to the KidsHealth.org article on how TV affects your child and PBS.org article (FAQs) on children and media.