Love is patient, love is kind.
Being the mother of a special needs child has given me considerable patience.  I remember when we were going through the initial evaluations.  One of things that was brought to my attention was that at 2.5 years old he wasn't following 1 step commands.  I spent an hour asking The Boy to bring me his cup.  I wouldn't let him out of the room until he did.  I stood in the doorway of his room asking him to bring me the cup. He'd walk toward me without the cup and I'd walk him back to the cup on the floor.  I held the cup in my hand and put it in his face and say "cup."  I ran back to the doorway and repeat "Bring me the cup." This went on several times.  There was a lot of crying - and I wanted to just say, screw it.  Because I was crying just as much as The Boy.  But I was determined to get through.  Eventually I did.  I was applying ABA methodology before I even knew what it was.
It does not envy, it does not boast, it is not proud.
Well...maybe it does envy a little.  Sometimes I look at other moms and I wish that our lives were easier.  That we didn't have this ongoing parade of therapists, evals and goals.  That the basic need of services wasn't a fight.  That a bureaucratic agency didn't have a say in our future. That we could just be like everyone else.  Don't get me wrong - I adore my boy.  But the personal and financial toll it takes on the spirit is tough. And believe me, that's nothing to boast about.
However, our love is most certainly not proud.  I've learned that in the last few weeks as I've called attorney after attorney saying "I don't have enough money to pay the legal fees."  Admiting to strangers that we are unable to provide for our child has been extremely difficult.  But I'd beg at the side of the road if I knew it would help.
It is not rude, it is not self-seeking, it is not easily angered, it keeps no record of wrongs.
Every decision I make is well thought out and always with someone else in mind.  Since The Boy's diagnosis, I never thought how will autims impact or interfere with my life.  In fact, immediately, after his diagnosis, I shut almost everyone out.  Nothing and noone else mattered, only The Boy and his services.  It took me a while to stop being angry.  Not angry at what this was doing to our family but angry at myself - for not seeing the signs sooner.  I am the greatest record keeper of my wrongs.  One day I will have to let them go.
Love does not delight in evil but rejoices with the truth.
I look at my boy and other children on the spectrum and am amazed by their innocence, the purity of their spirit.  They do not lie - lies are too complex for them to understand.  And yet they are considered atypical?
It always protects, always trusts, always hopes, always perseveres.
We are The Boy's protector.  When initially evaluated, we weren't given much hope.  We had to find it within ourselves.  Over the years, we have hoped and we have perservered.  Without love, hope and pererverance wouldn't have been possible. 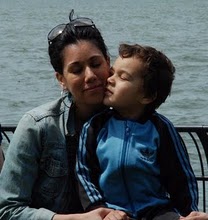