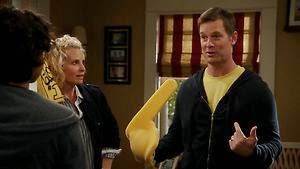 I've been watching Parenthood since it started. I don't know why I've never written about it before. I love the show. (It also sort of annoys me…but I don't want to get into that now.) The show tackles subjects that really hit close to home for me. Last night's episode - rather Max' story line - really moved me.


Adam's confused when Micah ignores Max at school. Micah is still Max's best friend, right? Max says they aren't friends anymore, but refuses to elaborate. Kristina wants to call Micah's parents, but Adam is determined to solve the issue directly with Max. After much probing, Max tells Adam that Micah's obsessed with basketball, which is stupid since he's in a wheelchair and can't play. Wheelchair basketball isn't basketball. Maybe that's what offended Micah... Per Adam's suggestion, Max apologizes to Micah and invites him to a Golden State Warriors game complete with hot dogs and nachos. Too busy with his new friends, Micah says no. Adam's heart breaks; Max has lost his only friend. Kristina and Adam rally, revving Max up for an awesome basketball game with his parents.


What I love about Adam and Christina (Max' parents) is how differently they feel when it comes to Max. It's honest and relatable. Over the years, I've seen them grow as a couple and evolve as special needs parents. And yet there is still so much they have yet to learn. I think they believed that because Max and Michah both have disabilities (for lack of a better word) - it would be the ideal friendship. However, Micah's rejection of Max reveals that having a disability doesn't automatically mean you can tolerate or understand someone else's.

Adam tells Christina, "Max has lost his only friend at school and kids at school are starting to notice his differences and he's all alone."

It's an experience I can see our family having. Maybe that's why last night's episode hurt my heart so much.

The Boy doesn't go to school with typical kids but he is getting older. The Boy will turn eight years old in two weeks. And the older he gets the more obvious his differences become. The Boy does not have the same interests as a 'typical' 8 year old boy. There are times when I wonder if The Boy experiences loneliness. Even if he doesn't, whenever we're at the playground and The Boy is playing alone - I feel it for him.

Breaking up with a friend is painful. When I walked away from a 20 year friendship it was a difficult decision but I knew it had to be done. And while I missed my friend, I took comfort in the fact that I had other valuable friendships. I could not imagine losing my one and only friend.

I know Max is only a character in a television show, but that rejection is real. It's something so many kids with autism face. And it's damaging. I never want The Boy to go through that. If I could shield him from those experiences forever, I would. But I can't.

The Boy doesn't need to be the most popular kid at school. All I want is for The Boy to have one kid, at least one person who gets him.

While Max has lost his only friend at school, I'm grateful that he has Hank. Because Hank is someone who gets Max.

And I hope there's someone like Hank in The Boy's life.

And if you have no idea what I'm talking about...check out this clip from last week's Parenthood episode, "Promises." (I was a hot sloppy sobbing mess watching this.)