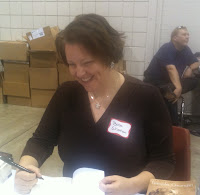 # of children/diagnosis: I have four kids, one of whom has autism.

Thank you so much for having me!  My name is Bobbi Sheahan, and my husband, Ben, and I have four children.  Our first two children, Lucy and Grace, are barely a year apart.  My daughter Grace has autism.

“Of course it isn’t autism,”  I’d say.  “She’s affectionate.  Plus, she’s a girl – what are the odds?” (More than 80 percent of those diagnosed with autism are male.)  A near-tragedy finally moved us to discover Grace’s autism. As I read everything that I could get my hands on, I was shocked to realize that a book like What I Wish I’d Known About Raising a Child With Autism didn’t already exist.   I suggested to Dr. DeOrnellas that we write this book to spare other parents some agony, some confusion, and perhaps some lost time and resources.  What I Wish I'd Known About Raising a Child With Autism is my third book.  My first two books, published by Texas Lawyer Press (a division of American Lawyer Media), are reference books for attorneys.  When I left my law practice to turn my full attention to my family and my writing,  little did I know where that path would lead.  For two decades, I used my writing to persuade courts and educate lawyers, but it was in becoming a mother that I  truly found my voice, my inspiration, and my life’s work.   My book is not only the story of my family’s journey of discovery, but my love letter to my daughter and my message of hope for parents. 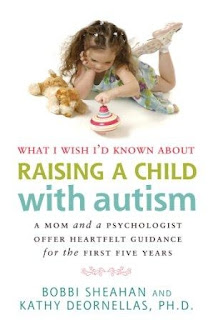 AW: What was your first reaction to your child’s diagnosis?

Bobbi: By the time we had an official diagnosis, we were just relieved to have confirmation of what we had already deduced through three and a half hard years of trial and error.  Grace was very different from the very beginning.  Her behavior ranged from quirky to baffling -- and sometimes frightening.  She didn’t make eye contact, she walked very early, she seemed insensitive to risk and pain but had a whole boatload of sensory sensitivities, she was a late talker, and then, when she did talk, it was not typical.  When we were told that Grace had autism, it was a confirmation of what we’d already pretty much figured out, and it was a means for us to begin to connect with the autism communities and get some meaningful help.

When I describe what we were observing, you’ll see why the diagnosis was a bit of a relief – at last, we had some understanding of our beautiful daughter and some idea of what she needed!  When Grace was an infant, she was quiet.  So quiet that we began to notice that she didn’t babble or make many sounds at all.   She didn’t cry when you’d expect a baby to cry:  not when she got her shots, and not even when she was hurt.  Not ever.  Not even stitches-to-the face hurt (twice).    She didn’t nap, and, as time went by, she made no moves towards speaking or potty training.  Frightened by Grace’s fearlessness, her ability to defeat childproofing, and her propensity to injure herself, more than one babysitter refused to come back.

Around the age of three, Grace began to speak in precocious bursts:  the entire script of a cartoon, complete with voices; her favorite book; all twelve days of Christmas; the whole 23rd Psalm.  She didn’t make eye contact, and she patrolled the perimeter of the playground instead of playing with other kids.  She loved the swings, and she seemed not to understand when she injured other people.    Her senses seemed to be completely miscalibrated; her hearing was acute, yet she took an inordinate amount of time to process the speech of others who spoke to her.  The not-feeling-pain thing persisted too; I still cringe at the story of the time that Grace grabbed a hot light bulb and didn’t respond to the burn, but did cry and cover her ears at my shriek as I pulled her hand from the lamp.  Believe it or not, that wasn’t the worst light bulb incident; when she was three, Grace ate a light bulb.  Well, part of a light bulb.  She began eating other things, too, including my anniversary roses.  We wanted so desperately to understand and we felt that we couldn’t reach her.

AW: What was your defining moment of acceptance?

Bobbi: I don’t know if I can pick just one.  When Grace ate that light bulb, it was a light-bulb moment all right; we knew that we had to find some answers.  Shortly after that, she tackled a smaller child at the top of our stairs; we later understood that she was acting out a scene from the Lion King.  The Moment of Truth for me came several months after diagnosis, and I call it my Duh moment.  After applying myself as diligently as I could, I finally accepted the truth: I could read every book, talk to every doctor, and create every therapeutic tool in the world and it wasn’t going to change the fundamental structure of my baby’s brain that made her act the way that she did. I may be Mommy, but there is no “all better” here. It doesn’t work that way. Whether you want to use the word "normal," or "neurotypical" (NT for short), my kid ain't that. Accepting that was sad and freeing at the same time.  Accepting this truth helped a great deal.  It also helped for us to understand that my sweet husband is also on the spectrum (which we discovered after our daughter’s diagnosis) and that I am either on it or adjacent to it (someday I’ll find out for sure).

What inspired you to start your website? Your book?  It was because of the three years of “trial and error” that I teamed up with Grace’s psychologist, Kathy DeOrnellas, Ph.D., to write What I Wish I'd Known About Raising a Child With Autism:  A Mom and a Psychologist Offer Heartfelt Advice for the First Five Years (Future Horizons, April 2011).  Let’s face it:  nobody should be as clueless as I was, and they no longer have to be.  We hope to spare other parents some of the pain, discouragement, and confusion that can accompany the early years of parenting a child who has or may have autism.   The book doesn’t just tell my story; it contains wisdom and stories from two dozen autism parents all over the world, as well as Dr. DeOrnellas’ sound wisdom and advice about every issue discussed in the book.

AW: What has been the most rewarding aspect of being special needs parent/writer/advocate?

Bobbi: I love that question!  I actually want to break it down to the three roles because there’s so much there.

I’ll start with being a special needs parent.  I love my husband and kids, and they bring me great joy.  I don’t want to make it sound easy: the struggles are real and not typical, and there are days that are just hard.  Watching my daughter grow and blossom and defy expectations is a joy for me.

Which brings me to the second part of your question:  being a writer.  Being a writer has been a dream of mine since I was small.  I never realized I’d have something to write about that would keep me up at night and mean so much to me and other people.  What a blessing that is.

As for being a special needs advocate, it’s an honor to be considered one!  I’ve always been a bit of an oddball and a nerd, and I’ve always found people so interesting – our imperfections, our differences, the things that others don’t accept – and being a part of a community, both locally and through media, is amazing and life-changing.  One recent example is the #youmaybeanautismparentif hashtag on Twitter.  Less than a month ago, my friends Jenny Herman and Elise Ronan started this hashtag (a searchable term starting with the # symbol) on Twitter, and there have been over a million Tweets and ReTweets, and it’s still going strong.  I encourage all of your readers to join in the fun!

AW: What advice would you offer parents of recently diagnosed children?

Bobbi: You are not alone. You may have already realized that autism isn’t always pretty, but sometimes it’s beautiful.  We worried about so many things, and I wish we hadn’t.  As parents, we tend to worry about stuff that never really materializes and sometimes miss the real concerns anyway.  With autism, that is definitely the case.  For example, I worried that my daughter wouldn’t have wonderful people in her life because we had encountered so many frustrating situations with people who didn’t understand autism.  Since her diagnosis, we have met the most wonderful people – many of whom we might never have met if it hadn’t been for special needs.

I would also advise parents to really give themselves a break:  take some deep breaths, gather their families close, and really take their time to understand.  There is a temptation to panic and to listen to a lot of noise in the media about autism, and what you really need is peace, support, and solid information.  You are the parents.  You will figure this out, and this is a marathon, not a sprint.  I wish that someone had told me not to panic early on, that it would really be ok.

AW: Feelings on diagnosis in 6 words or less


Bobbi: (okay, I took 7, but some of them are really short words :D):
Not always pretty, but sometimes it’s beautiful.