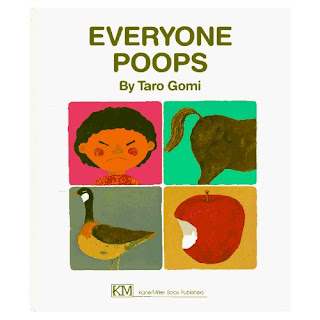 So...we're still potty training.*  Sort of.  We've moved from potty training books to "Everyone Poops" by Taro Gomi .  Which The Boy finds hilarious!  And I get a total kick out of hearing him say the title "Everyone PooTs" - of course, I correct him.  And at that point he says poop properly - which is still cute.

So, I guess we're poop training.  Because The Boy will just run to the bathroom when he has to pee.    Does he immediately wash his hands when he's done? Not really.  But hey, baby steps, you know.  I'm just happy to have him out of pull ups and in Spiderman undies.  (At least during the day, we still require pull ups at bed time. But that's a whole other beast.  And like I said - baby steps.)

Last night, while trying to write and The Husband was watching a movie, I yelled, "Babe - check on The Boy."  He was too quiet.  And when The Boy is quiet - something bad has already happened or is about to happen.  I was right.

Then it was The Husband's turn to yell - "Better turn the TV off, I'm gonna be a while."

"Need back up?" I yelled.  We live in a 2 bedroom apartment - there really isn't a need for all of this yelling.  But it's what we do.

Before The Husband had a chance to yell back, I got up and walked into the bathroom.  The Boy was sitting on the toilet, his skid-marked Spiderman undies on the floor and poop smeared on both of his little legs.  A crumpled square of toilet paper in his hands.  He's looking up at us - smiling.

The Husband looked at me.  "I found him sitting here, trying to clean himself."

We both say GOOD JOB!  to The Boy.  And the Boy continued to rip toilet paper in an attempt to clean himself.  Which is great - he's getting it!  Though when it comes to poop - he's hit or miss.  And I went into The Boy's room - sniffing around for poop like a bloodhound - just in case he missed.

*The Boy is 5 years old and we've been potty training since he turned 3. It's a process...