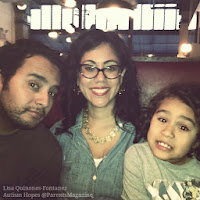 I don’t understand autism,” a friend said while we were eating dinner. We’ve know each other since grade school and hadn’t seen each other in a while. We were catching up and asking about our families. Though we are close enough to ask each other almost anything, I could tell she was uncomfortable admitting she didn’t know much about autism. I couldn’t blame her. I didn’t understand autism either, until I had to.
Autism isn’t something that can be easily summed up in a sentence. Or a blog post for that matter. And I was at a loss at how to explain it to her so that she could understand. I told her about Norrin and the progress he’s made. We talked a little about the future. And then like long time friends who hadn’t seen each other for a while, we immediately moved on to another subject.

But I’ve been thinking about our conversation since. I thought about the This is Autism Flash Blog in response to Suzanne Wright’s Call For Action. Wright believes that parents raising kids with autism are “not living,” they merely exist. And that we live in despair.

Read my post on Parents.com/To The Max - This is My Son. This is Autism - HERE.
Labels: autism, autism awareness, Parents.com