Over the years since his diagnosis, The Boy and I have connected on many levels with like interests. His love of The Peanuts Gang, the '67 collection Spider-Man cartoons, and my pancakes are an example of things that before I became a parent I had always wanted to share with my child.

However, it's his love of cars, especially the movie Cars, that we share a bond that seems inherently ingrained in both of us.  I grew up in the era of muscle cars, behemoth coupes, roll down windows, and no AC. My Pop was a "wrencher." Any problems with the family car, and in the '70s there always were, my Pop was out front fixing it. I seemed to have bucked this trend as I have absolutely no knowledge of car repair. That does not mean I do not love cars.  I obsess over their lines, shapes, sounds and smells. As does The Boy.

A few months after The Boy was born, we were getting prepared to take the bus to visit my sister. With The Boy in tow we boarded at the first stop of the BX14. (We did not have a car, and living where we did where parking is as scarce as a Bigfoot sighting, we did not feel the need for one.)  It was 11am on a weekday and we were the only ones on board. The Boy was in his carriage and we proceeded to the back of the bus so that we would not be in anyone's way. Once we sat down the driver followed us and proceeded to berate because The Boy was still in his carriage and would be in someone's way. Still being new parents and feeling overprotective we tried to express our feeling more comfortable with his safety having him in the carriage. The Bus Driver refused to drive the bus until we took The Boy out and sat him on one of our laps. At that point we complied.

The driver proceeded to drive and between the first stop and the stop where we got off, about 4 1/2 miles later, 3 people boarded the bus. Infuriated and annoyed we left the bus and gave the obligatory Bronx sarcastic, "Have a nice day", and continued on our way. At that moment I said to The Old Lady, "We're getting a car!" It was stated a little more colorfully at the time. 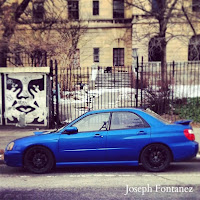 There was really only one car for me and that car was the Subaru Impreza WRX. I had obsessed over this car for years. When I was in Asia 90% of the photos I took were of WRXs. When we were finally able to we bought one in WR Blue, the only color acceptable to me, in April of 2006. I was so happy to not have to depend on public transportation or friends to get our family around. That feeling of independence filled me with pride. Funny how things this trivial can make someone feel so happy, when two years later we would be hit with the news that would leave a pit in my stomach that in some respects still exists today.

It's odd to state that a car could be part of the family. How can an inanimate object be considered a family member? Well, that car has shared in all the ups and downs we have had with The Boy.  It was in The Car where we first openly sobbed after The Boy's diagnosis.  It was in The Car through rain, sleet, and snow that I would take The Boy to therapy and The Old Lady to school. The Car was there for all of The Boy's first days of class. It was there for both of The Old Lady's Graduations, and I am hoping will be there for The Boy's future graduations. 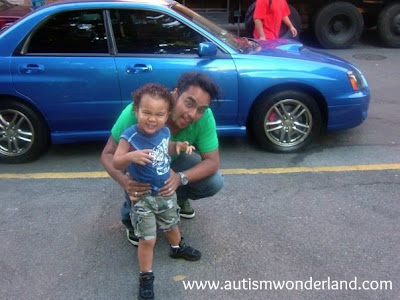 You can tell that I am quite fond of The Car. Just as I had expectations for The Boy, I also had expectations for The Car.  When we purchased it I had hopes that when The Boy graduated High School the car would be his. In my mind it would have been like my Pop buying a '69 Mustang maintaining it and giving it to me at my High School graduation.  (Now I had five other siblings that probably would not be too happy with that sort of arrangement, but I am speaking hypothetically of course.) 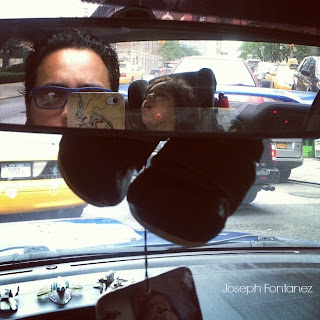 The day The Boy was diagnosed I felt as if that reality was taken away from me.  Crying in the front seat, I felt so uncertain about the future. When I glanced at The Boy sitting in the back, with his curly locks and his cheese smile, I thought to myself, "Screw This!", I was not going to let this bury me.

It's been five years since his diagnosis and I continue to do my best in maintaining The Car.  It’s had its share of dents and dings, but for the most part it looks good for its age, like myself.
I still hold on to the hope of Norrin one day inheriting The Car from me, which adds to my obsessing over every little repair.  That's where The Mechanic (Vittorio Principe) comes in.  Or as Norrin calls him, "The Pit Stop."  Vittorio makes sure that The Car stays in great shape and more importantly, totally gets The Boy.  He has been more than accommodating to The Boy when he visits the shop.  Always willing to give him a tour as The Boy marvels at all the different tools hanging in the shop.  Meeting kind people is essential to The Boy's development, just as The Car is essential to our family.