Disclaimer: I was provided with a review copy of Lego Marvel Super Heroes. All opinions are my own. 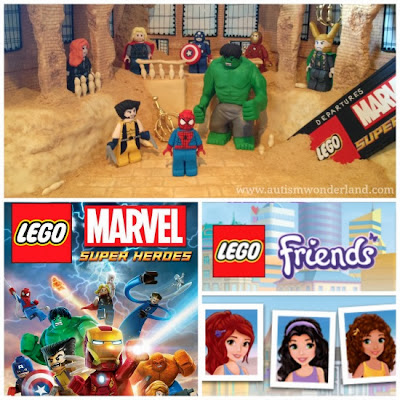 Back in September, I was invited to a blogger event where I got a sneak peak (and a chance to play) some cool new video games - including LEGO Marvel Super Heroes and LEGO Friends.

I know some parents are concerned about screen time but video games have been critical in helping The Boy. So I am always on the look out for video games that will be fun, interesting for him to play and have some kind of educational component to them.

Since The Boy is a huge LEGO fan, I knew that he'd be interested in LEGO Marvel Super Heroes. We have been playing the Xbox 360 version for a few weeks now and he's really gotten into playing. He is familiar with all the characters and playing has been a great way to explain to each superheroes specific power. Even though it's a lot of information to absorb, I feel like the more he hears us talking about it - he'll get it. Like everything else, it's about repetition. And I love watching The Husband and The Boy play LEGO Marvel Super Heroes together.

What the husband likes about Lego Marvel Super Heroes is:

This game is Rated "E for Everyone 10+ and The Boy will be eight in January. So yes, he's still too young to play and to completely understand the mechanics of the game. But it's a game I feel comfortable with him playing. Right now, we focus on The Boy learning to maneuver the characters around the game and reading the instructions between levels and the subtitles.

LEGO Marvel Super Heroes features an original story crossing the entire Marvel Universe. Players take control of Iron Man, Spider-Man, the Hulk, Captain America, Wolverine and many more Marvel characters as they unite to stop Loki and a host of other Marvel villains from assembling a super-weapon capable of destroying the world. Players will chase down Cosmic Bricks as they travel across LEGO Manhattan and visit key locations from the Marvel Universe, such as Stark Tower, Asteroid M, a Hydra base and the X-Mansion.

While at the event, I also got a chance to play LEGO Friends. Being a girly girl, I loved playing it. It was fun creating a character that reflected my style and personality. Players are also able to pick their character’s outfits, hairstyles, and accessories, select a pet or design and personalize their character’s bedroom.

LEGO Friends is available for Nintendo 3DS  and DS and is rated “E” for everyone.

The Boy doesn't have a Nintendo 3DS or DS so it's not a game he can play. But if he had one (and we're hoping to buy one for his birthday), I'd have no problem with him playing LEGO Friends. I don't believe in gender specific toys or games. The Boy enjoys playing with all LEGO products including the Friends line. The Boy would especially love picking out his own pet. I also think the Friends game would help him understand the concept of picking out clothes - something we've been working on for a while. I think the LEGO Friends video game would be a good 'starter' game for him to play on a handheld device.

Disclaimer: I was provided with a review copy of Lego Marvel Super Heroes. All opinions are my own.