I think Charlie Brown has Autism

Charlie Brown: Actually, Lucy, my trouble is Christmas. I just don't understand it. Instead of feeling happy, I feel sort of let down.

Norrin loves Charlie Brown. Obsessed would be a better word. Over the last few months, It's the Great Pumpkin Charlie Brown, A Charlie Brown Thanksgiving and A Charlie Brown Christmas dvd's have been in serious rotation.  Norrin's fascination with the cartoon surprises me - there is nothing sophisticated about the animation and the dialogue is complex for a four year old. But still, Norrin will ask to "sit and watch" any of the three dvds. I explain to Norrin that Halloween and Thanksgiving are finished, it's time for Christmas. Christmas is the dvd he has the least interest in.

Watching it the other day, I couldn't help but think that Charlie Brown may be somewhere on the autism spectrum.
(I do that a lot - diagnosis people or characters with autism.  I've diagnosed classmates, family members, coworkers.)  Charlie Brown has trouble understanding Christmas.  He speaks in a monotone voice.  He is teased by his peers and is often alone.  He is fooled easily - especially by Lucy Van Pelt.  Sarcasm eludes Charlie Brown.  He has conflicting feelings about Christmas.

Maybe that's why Norrin loves Charlie Brown - he relates to him, understands him. So I will let Norrin watch all the Charlie Brown he wants. Charlie Brown has been a beloved cartoon character for decades. And ultimately Chuck saves the day in the Christmas Special; Linus helps him understand the meaning of Christmas. I'm sure Norrin has just as much trouble understanding Christmas. I will be Norrin's 'Linus.' But Norrin doesn't need to understand just yet. As long as I know he isn't let down by it, I know I've done something right. 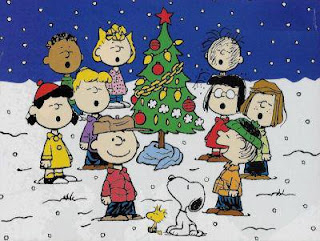